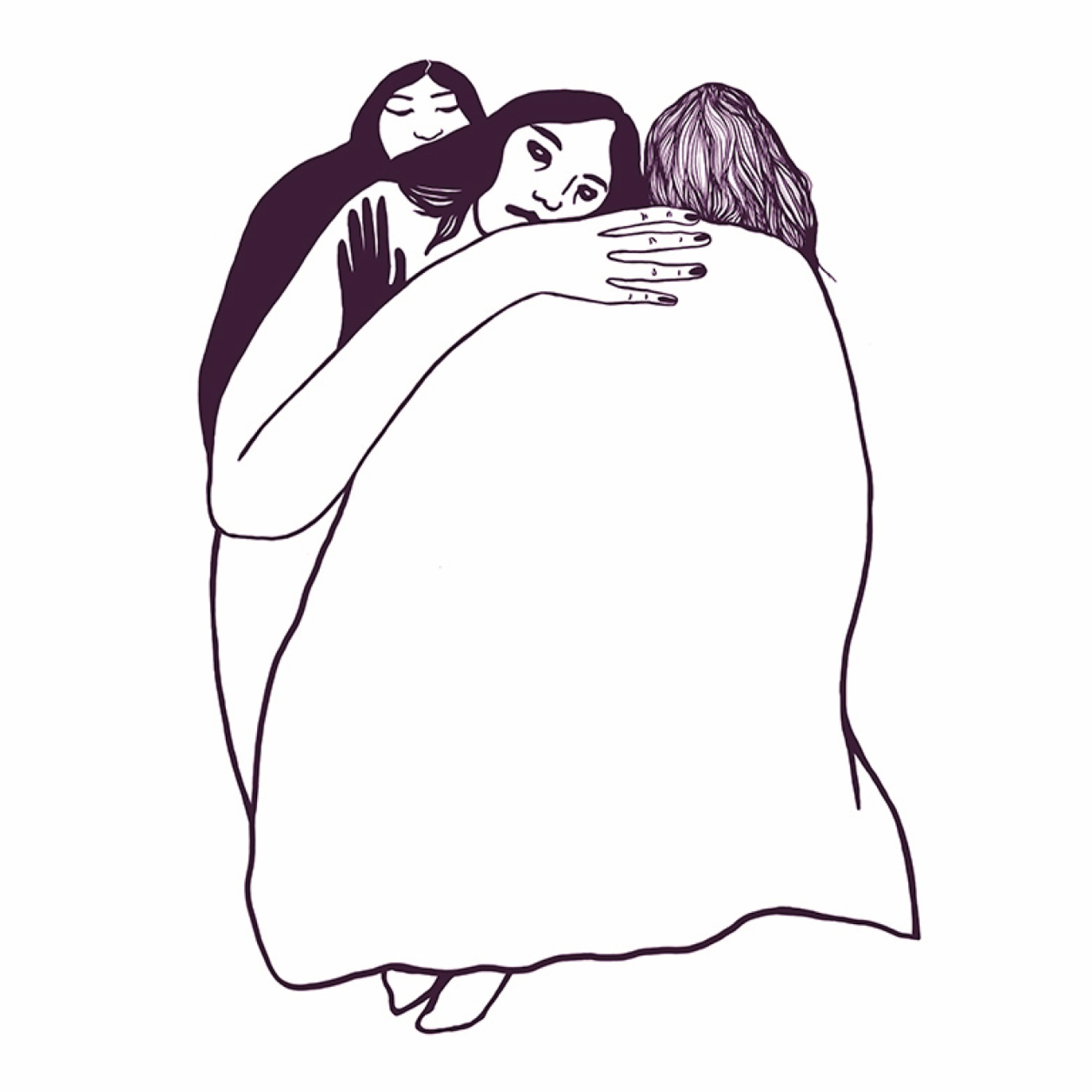 In gezhizhwazh, like all the songs and stories in Islands of Decolonial Love, Leanne Simpson writes so succinctly about mothering, birth, internalized colonization, intergenerational trauma and survival. Through the interactions of the storyteller and the child listening, we are taught much about fraught attitudes around accent, authenticity, sexual stigma and acceptability: “what do you know about decolonized? […] you think I’m only authentic if i’m talking rez. you the one suppose to be listening anyway. how can you be doing any listening when you’re all critical about my authentic-ity?” (Simpson 2013, 108). I have read this story many times over the last few years, and this part always sticks with me. Perhaps it is just a very niche experience, but sometimes studying in any Indigenous studies program can feel like everyone is playing a losing game of ‘more-decolonized-than-you,’ and the way the auntie retorts to the child, names this and exposes it as another form of shrinking the worlds that Indigenous women are allowed to inhabit, is cathartic.

The repeated emphasis on who is listening, and whose job it is to listen, points to what is lost when we get caught up in tearing each other down about the things that don’t matter: that the next generation won’t know what to do, that they will forget to perpetuate the story and the teachings. Simpson writes, “tell the ones about that strong young nishnaabekwe who wasn’t afraid of those wiindigo […] tell those ones, so those young ones will know what to do. teach those ones. make it so they’ll want to listen. make it so they’ll pay attention.” (Simpson, 106) When I first read this in 2016 as a 19-year-old, it was the first time in my life I had read any sentence like it; “tell the ones about that strong young nishnaabekwe who wasn’t afraid” was something I needed as a young person. Indigenous literature has been more focused on men’s lives and stories, or at least the ones men tell. Indian Horse was made into a movie and cast a known abuser; Sherman’s books are everywhere and don’t get me started on Taiaiake. I know that ultimately it’s all a trap, because white men do much worse and are allowed to get away with way more, but I want better. Where is Erdreich’s Love Medicine movie? Why did all my moniyaw professors only teach Alexei novels as their Indigenous content until like, last year? Why do they keep telling me to read Taiaiake Alfred? Why was Leanne Simpson the first writer I read in my undergrad to write, “that strong young nishnaabekwe who wasn’t afraid”? I don't want to fetishize strength or put it in a binary: I know being “the strong one” is a trap to keep (young) Indigenous women, two spirit and queer folk binding ourselves to unlivable circumstances to prove we are not weak. I know what we glorify as strength in women and queer folk. However, the loneliness would have gone unfelt for me if I had heard that sentence more in my young life, and the humanity I would have permitted myself, if it had been affirmed to me that there could be more to my life than to be told by others (and authors) that I would be either a slut who died young because of my ‘lifestyle’, or a long suffering ‘bitch’ whose feelings and inner life and wisdom do not matter.

In the story the auntie tells/the auntie’s story, gezhizhazh has fought the windigo before and won. However this time, they come back hungering for the land instead of the people, and gezhizhwazh struggles to untangle the insidiousness of their new tactics. The difference in the wiindigo’s approach this second time around is described by gezhizhwazh as all encompassing- she can’t figure out how to contend with such a broadly applied logic that is the pervasive and violent structures of colonialism. gezhizhwazh describes the extent that her attempts to learn their ways this time has harmed her, “i am thinking like them, so much so, i sometimes forget i’m me” (Simpson, 110). I think this is a clever point about the harms done to Indigenous thought and freedom when it is forced into colonial systems, that when individuals try to ‘fight ‘em from the inside’, they find it soul-crushing. The auntie telling the story talks about how gezhizhwazh “won battle after battle after battle, with virtually no impact on wiindigo power” (Simpson, 110), which sounds exactly like what battling the Canadian settler state over land rights, treaty violations, self-governing agreements, resource extraction projects, stealing our children and letting our people die from police and settler-perpetrated violence feels like. It felt powerful to hold the rails at a standstill for Wet’suwet’en land defenders, to remind Canada how much we love and will fight for our kin, to march and fill up the streets, to sing and drum at round dances all over the city. When those protectors were beaten by police at railway blockades, held indefinitely by police and RCMP, denied legal counsel and denied access to medical attention, we were reminded of the pervasiveness of the settler state and colonial violence. We were reminded of the violence that traumatized generations of our families and steals lives from our communities. I could tell horror stories from this time around, or the last 100 times, but they’re all the same: Canada can do what it wants. “They want all of the land” (Simpson 2019, 81).

The pervasiveness of this violence leaks into every part of our lives, including love and our interpersonal relationships. In Billy-Ray Belcourt’s paper Masturbatory Ethics, Anarchic Objects: Notes on Decolonial Love, Belcourt dissects the approaches different scholars have taken towards decolonial love. On Simpson, he notes that she “theorizes the emotional rift in settler states whereby Indigenous peoples rarely know what love, or what José Muñoz called an intimacy ‘beyond the synchronous presence of’ the flesh, looks or feels likes” (p 3). He points to a passage from buffalo on in Islands of Decolonial Love:

We're all hunting around for acceptance, intimacy, connection and love, but we don’t know what those particular med’cines even look like so we’re just hunting anyway with vague ideas from dreams and hopes and intention, at the same time dragging around blockades full of reminders that being vulnerable has never ended well for any of us, not even one single time. (Simpson, buffalo on, 85)

Belcourt continues: “For Simpson, ours are bodies that are tethered to blockades, blockades constitutive of the materiality of settler colonialism’s monopolization of love, a monopolization that traps some more than others in the thick of things, so to speak” (Belcourt, pp 3-4). This monopolization on love leaves Indigenous peoples floating between states of being where we want more, would like to shed some of the generational curses bestowed on us by intergenerational trauma, yet feel constantly targeted by settler colonialism and all of its spectres. That weight does not disappear. In Kristina Aurylaite’s paper, Decolonial Gestures in Canada’s Settler State: Contemporary Indigenous Writers Jordan Abel and Leanne Simpson, Aurylaite also points to Simpson’s passage in buffalo on to talk about the damage done to Indigenous interpersonal relationships:

“Right off the bat, let’s just admit we’re both from places that have been fucked up through no fault of our own in a thousand different ways for seven different generations and that takes a toll on how we treat each other. it just does. […] her mom did not teach her how to accept a lover’s caress, a kind or a helping hand. so instead we did shots of jameson and fucked every friday night in a bathroom stall in a bar down the road by a lake, not too far from here. that’s how we were gentle. (Aurylaite 19- 20)

Aurylaite goes on to note that “for such characters, decolonial love promised in the title of Simpson’s collection is possible through an effort to recognize what continues to fuel such dysfunctional behavioral patterns” (Aurylaite 20). This means recognizing that maybe we can’t fix each other all at once, but we can meet each other where we are and work on removing the colonialism that has inhabited our bodies and minds through localized, specific love.

In buffalo on, Simpson explicates how the suffering in residential schools and the daily task of surviving colonialism has removed autonomy from the interpersonal relationships of Indigenous people, and in buffalo on in particular, the full autonomy of parenting is removed. The parents must raise their children to survive, and are not allowed to celebrate the vulnerability that could get them killed in a colonial, racist society: “when you’re raising someone to survive a war that the other side invests millions in convincing people it doesn’t exist, you raise your army to be tough. you teach them not to make a big fuss. you teach them not to feel” (Simpson, 87). The parents here are not allowed the same freedom of their white, settler counterparts.

With the help of her flashy partner, gezhizhwazh arrives at an idea about how to combat the wiindigo. She aims to disrupt the ways the wiindigo have infiltrated birth work, to prevent them from planting the holes in people when they enter this world. She works in a small way to restore that ceremony and autonomy to mothers as a way to heal a generation from being “willing to pay for disconnection” (Simpson, 111). Through this story, Simpson points to decolonizing birth work as a step to removing colonial bonds over a new generation.

gezhizhwazh means ‘to cut’ in anishinaabemowin. I was raised with wiindigo stories (or in ililimowin/Cree: wihtiko) when I was growing up, and was told that the way to kill wihtikowak was to cut out their hearts. Maybe here, the meaning of gezhizhwazh exists in abundance: to cut an umbilical cord, to know how to heal with a knife, to wield a knife to restore autonomy. To have autonomy over birth and birthing ceremonies gives consent, choice and presence back to Indigenous parents. This opens the possibility of another cutting: a severing of wiindigo hold over Indigenous life from the moment of birth, a freeing of Indigenous life in the most intimate of experiences. Through this story, Simpson illuminates a possible world where Indigenous families can be whole, and Indigenous parents do not have to raise their babies to be tougher than the worst things that has happened to their family. A future where vulnerability is a gift, not a death sentence; even if we love our tough and world-weary aunties all the same. 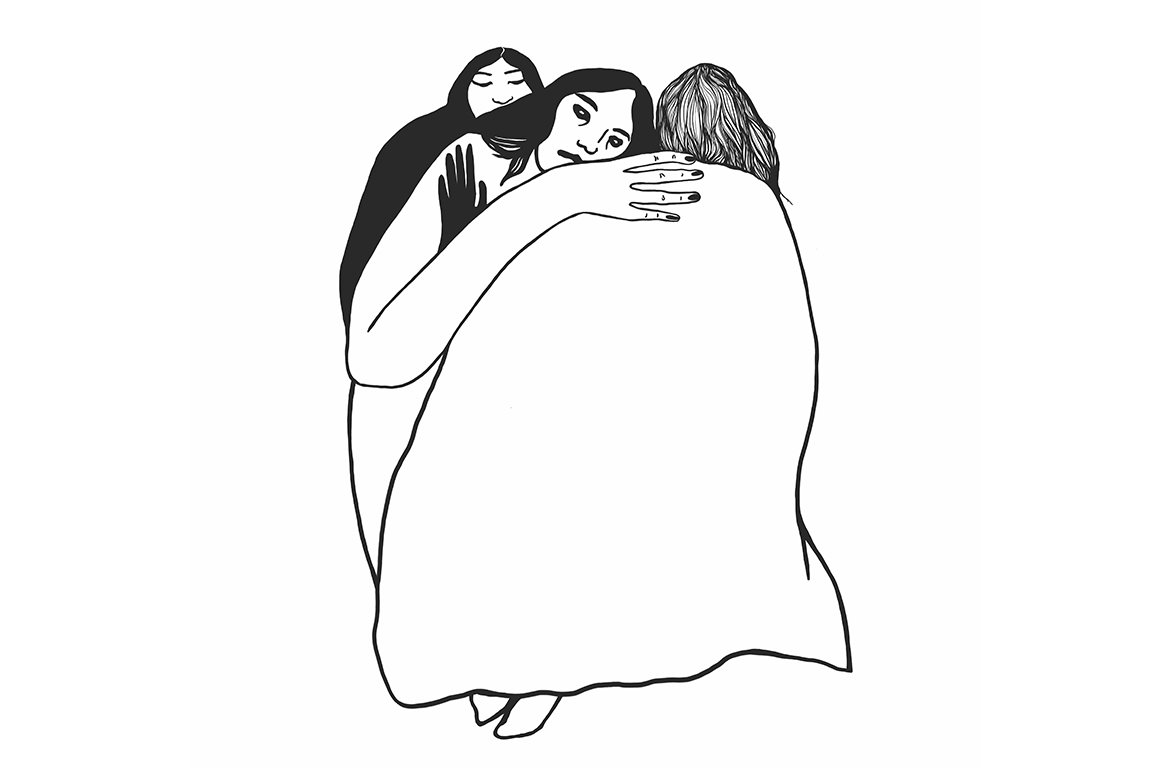 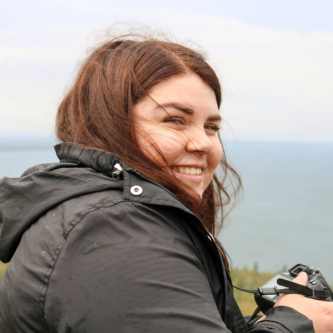 Megan Feheley is a Two Spirit Ililiw (Moose Cree) interdisciplinary artist and curator living and working out of Toronto. They are currently working towards their BFA in Indigenous Visual Culture at OCAD University, and work predominately in sculpture/installation, beadwork, textiles, painting and video. Megan is passionate about resurgent practices, language revitalization, working with materials that connect them to their homeland, and imagining Indigenous and queer futurity.