The HIV crisis of the 1980s hit LGBTQ2+ communities, immigrant populations, drug users, and the homeless of North America in a way that amplified the governments’ lack of acknowledgement of the bodies this virus was predominantly affecting. Felix Gonzalez-Torres, a Cuban born artist and gay man of the United States saw his friends and eventually himself succumb to not only the HIV virus but also the government’s neglect. Gonzalez-Torres reacted to this genocide of queer and immigrant bodies by weaving critiques into his personal experiences; continuously making his art public and private. At a time when his minimalist contemporaries were simplifying objects as art, focusing in on the essence of the object, I think Gonzalez-Torres was taking this further by using the simplified object in a participatory way that would evoke his embodied memories along with the memory of whoever his art engaged. His art pieces demonstrate a way of remembering the body and a way of helping others remember the bodies that could have been forgotten. As humanity as a whole faces the spread of a new type of virus at the time I write this, that seemingly effects many different levels of society in different ways, I find Gonzalez-Torres’ work even more interesting to think through government reactions, remembrance, forgetting, and bodies themselves.

Gonzalez-Torres gave each of his works the title of being “untitled”, followed by a brief word or two in brackets. This really is the starting point for examining his works and what they mean as a whole. It creates a fluid connection between all of his creations; they are all connected through this absence of identification, with bracketed glimpses of meanings that allow the participant to conjure up related memories or even memories of their own. The “untitled” becomes the point where the viewer transitions in to a participant by interacting with the work on a cognitive level. Many of his creations reflect this concept of a whole that contains potentially limitless, ever-flowing, smaller parts. Examining his works all as one in this way shows how it is all a body, it is all memory, that connects and has different aspects that evoke different things in different people. As Susan Tallman writes, “the interaction of parts within a whole is the essence of composition,” that we have been taught to form something with “lasting power”1. I think Tallman and I would both agree his compositions have this lasting power and that the stability is disrupted through dissemination of the whole.

Though Tallman does not quite say it herself, when she describes Untitled (1991) , her description of the sculpture reflects one aspect of how memory functions. The sculpture consists of poster sized printed wave imagery stacked in unison to become a cube like structure. Viewers are encouraged to take one of the print outs with them and do with it as they wish. The gallery in turn must replace the sheets to the original number and maintain the dimensions of the sculpture. Tallman writes “however they are treated, they will continue, at least in the minds of those who took them” describing how the institution decides the setting and location, “how to treat them”, but the fact that once participants take pieces of the sculpture away it is beyond the gallery’s control how they remain in those participants’ minds (1994).  Prior to this she also describes the fact that the unified stack contains multiple moving parts with unperceived destinations for them. Many artists from Latin America tackle the issue of where memories go and how they are controlled. I think Gonzalez-Torres uses this metaphor of institution, containing many moving parts, in this case sheets of paper, in a singular minimalist object of information, of memories that can easily be disseminated if the right strategy is implied. This also connects to his paper stack Untitled (1991)  where each piece of paper contained a date, a memory, information, but is not meant to be disseminated like his images of water. The viewers only participate on the cognitive level and do not get to become part of the story in the way they do in pieces such as Untitled (1991) . Though these pieces are held in different institutions, looking at all his paper stacks and all his creations as a whole portrait of life is useful. Memory can be repressed into a singular block, seemingly inaccessible, but still there.

The group of works that are now called his “candy spills'' consist of a determined weight and colour combination of small individual candies, that function similarly to the paper stacks. The gallery or institution purchases the concept of the piece then they place the candy spill in whichever corner, space, or wall of their building they choose. The determined weight of candy must be maintained while gallery visitors take pieces of candy and, most likely, consume it each day. Where his paper stacks, in my reading of them, dealt with the issue of memory, these piles of candy deal with determined weight of human bodies Gonzalez-Torres knew; human bodies affected by the HIV virus that violently ripped through his life and his community. These piles of candy are titled “untitled”, but the brackets have indications of bodies such as Untitled (Ross in LA), or perhaps a grouping of bodies as with Untitled (USA Today). I think that because Gonzalez-Torres only began working with the candies after his partner Ross’ death it is imperative to their meanings. These works are deeply personal to Gonzalez-Torres’ life but the way they disseminate among the participants also makes them very public. This could simply be seen as a participatory minimalist work about shape, form, and pieces; but Gonzalez-Torres makes minimalism personal, about the body, about what is happening in his world and the world of many others. They are political but also question an individual's role in society. Colourful piles of candy are so easily picked up, carried away, and digested. A body becomes digested by the community. Memory becomes digested. A virus is transmitted.

But is that really the only reading of Gonzalez-Torres’ work? Adair Rounthwaite’s essay Split Witness: Metaphorical Extensions of Life in the Art of Felix Gonzalez-Torres (2010) furthered my understanding and ideas on Gonzalez-Torres and gave me new perspectives on his oeuvre. Rounthwaite goes in to a deep reading of Gonzalez-Torres’ works as haunting and describes how the haunting effect of artworks comes from the aspects of a culture or society that have been dismissed or repressed, but how artists find ways to discuss them2. I think this relates to my description of the paper stacks and how they are metaphorical of an institution controlling memory. Rounthwaite also describes how the timelessness of Gonzalez-Torres’ artworks allow the blending of life and death, as they can morph or be added into any reality they live in, as well as evolve with society. They also draw similarities between how Gonzalez-Torres as an artist sometimes appears both dead and alive as his art evolves after him and takes place in exhibitions with living artists.

I want to finish this brief, reflective piece on Felix Gonzalez-Torres’ artworks with one that Rounthwaite drew my attention to in his essay. The artwork Untitled (A Portrait) from 1991, the year Gonzalez-Torres’ partner Ross died, consists of a screen that loops a five minute video of words and phrases. Some of the words that appear on the screen are as follows:

In my perspective, this creation of Gonzalez-Torres encapsulates all of what he was doing with his artworks. Each word demonstrates what his life was like in a moment, but each word, as an artwork, allows the viewer to reflect on their own life, as well as the existence of others, in a certain frame of totality. In this time of world chaos and lockdowns, I think a piece like this can travel from 1991 to 2020 with ease. It captures the contradictions of life, the simplicity and the pain; life and death meshed together. These words are all moments, and moments can be all-engulfing. You can look at each sculptural artwork by Gonzalez-Torres, and if you look hard enough, you might see a body, a memory, a history, and a future. 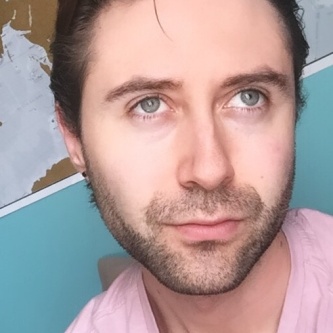 Thomas Boeckner is an undergraduate student at OCAD University in the Visual and Critical Studies program. He currently lives back and forth between the cities of Toronto and Thunder Bay in the Canadian province of Ontario. His main area of interest is art and culture of the Americas contributing to decolonization efforts and how artists make use of the body in the maintenance of memory.