The Hindu Woman in Love 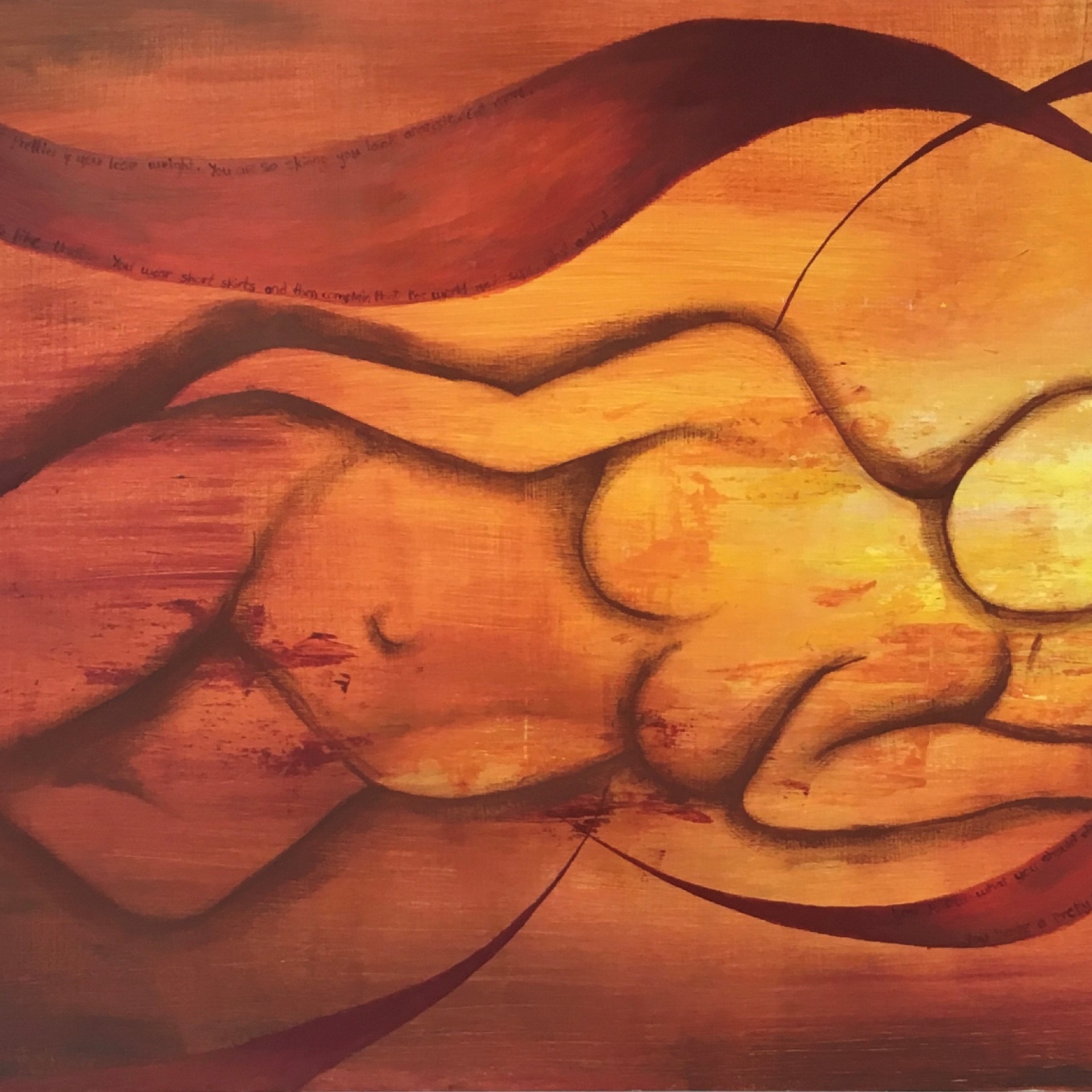 In Simone de Beauvoir’s text, "The Woman in Love," she describes women as passive, subservient beings ready to completely surrender to a master: a man. The woman gives her all to the relationship and the man still maintains his individuality. Beauvoir argues that even when presented with the freedom to choose a different path – a career, for example, that leads to a level of independence and stability – women would rather choose to succumb to a man and be dependent.1 This discussion of the woman in love, which closely reflects the patriarchal conditions of society, caught my attention particularly because of the parallels I could draw between it and my experiences growing up in a South Asian community. Beauvoir also employed an aggressive and satirical approach to writing that I feel added a noteworthy conceptual subtext, powerfully reflecting how the patriarchal system prevails as a result of women internalizing and reinforcing it. Often feminist writings have lacked an acknowledgement of intersectionality which makes early feminism inadequate for women who suffer from oppression relating to more than their gendered identity.2 Yet this reading truly contextualized how women have internalized misogyny and patriarchal ideologies, as well as the toxic masculinity that plagues men, especially coming from an Indian background where patriarchal systems are very apparent.

Beauvoir states in reference to Friedrich Nietzsche’s The Gay Science that women do not hesitate to physically and emotionally surrender their entire selves to their love.3 Women have negligible value unless they are devoted to a man and this is their ultimate goal in life, “destined to the male from childhood”.4 Reading this, I found very close overlaps to how marriage is viewed in Hinduism. In Hindu culture, while it may be more progressive now, marriages are often arranged and are the union of families rather than two individuals in love. Within a marriage, very strong patriarchal standards are followed, conforming to conventional gender roles with women taking on a passive role.5

The traits of an individual woman in love as suggested by Beauvoir translate directly to Indian women in a marriage. The woman in love has one main objective as “an inessential object,” which is to submit to a man and be united with the “sovereign” subject who is far more superior than herself. This is the natural order.6 Similarly, Hindu women must marry and this dictates their lives. “‘Doosre ki amanat hai’ (She is another person's property)”.7 After marriage, she is now the property of her husband and his family, no longer considered a daughter to her parents, who give her away to the family of her husband. Her only duty is to serve her new family and this is a woman’s primary purpose.8

From an early age, I have witnessed numerous ways in which women are subordinate to their male counterparts in a household. They prioritized domestic work, along with being the primary caregiver of their children, despite often having careers and regular 9-5 jobs just like their husbands. Their career goals always seemed to come second to their domestic duties. This never applied to the men of the house. Day in and day out, I watched my mother wake up early, get my sister and I ready for school, prepare breakfast and pack lunch for every member of the house and finally head to work by 8 am. She returned in the evening, sometimes as late at 7pm, yet we would have dinner served by 7:30 pm without fail, and she would only eat after everyone else, including her spouse, had eaten. This not only conformed to gendered roles of men and women, but also reinforced a submissive, unwavering devotion to the man. As a result, a level of dependency on the man is also preserved.

Beauvoir argues that given the choice to take a path of independence and freedom, a woman would still choose to tie herself to a man. Women long for the security and simplicity of their childhood even when they are adults, and being with a man helps get back to that state of “quasi-passivity”.9 Interestingly, Beauvoir seems to suggest that despite women being victim to a deeply rooted societal structure, women are not “entirely innocent in their subjection”.10 This was a particularly thought provoking part of the chapter for me, as it addressed the aspect of choice and decisions made by women that uphold patriarchal systems. Choice is a challenging concept, especially within this framework, which made it difficult for me to understand whether it was right or wrong for a woman to choose a life of subjection and dependency.

Kathryn Morgan eloquently begins this discussion in her text, “Romantic Love, Altruism, and Self-Respect: An Analysis of Simone De Beauvoir,” with the following:

At the first stage of assessment it is important to determine whether or not the choice is really a choice. That is, we need to know whether the necessary pre-conditions of genuine choice have been satisfied. As a minimum, genuine choice requires knowledge, freedom from coercion, and access to other real alternatives. Therefore, we need to ask whether the choice of romantic love satisfies these conditions.11

Certainly, Beauvoir's text would not consider a woman's commitment to traditional marriage to be a legitimate choice. In the context of Hindu culture and beliefs, which are centuries old, it is impossible to ignore how the patriarchal nature of the culture is deeply ingrained into Hindu women. The systems have been normalized, making it difficult to view the route taken by Hindu women to commit to marriage as a genuine choice.

The responsibilities taken on by women in South Asian households are unmeasurable, and result in unprecedented levels of physical and emotional stress for them.12 However, in my experience, these ideals are rarely questioned by women, but rather actively passed on to future generations. From a very young age girls are almost conditioned by their matriarchal figures; being taught how to cook and serve, along with other domestic tasks, while young boys are not treated this way. Indian girls are molded into the ideal woman and the ideal daughter-in-law. This does not leave them many other alternatives. Moreover, they may even risk their own and their entire family’s reputation if they chose a different path. Through this repeating cycle, this behavior of women has become a natural progression that their lives follow. As I see it, women appear to have found power and satisfaction in humbling themselves to this servitude; which has inherent value.13 It is key to note that I am in no way seeking to discredit the incredible and essential work that South Asian women do without any hesitation. However, it is impossible to ignore the influence of patriarchal standards on such views, and therefore, I would not call this a genuine choice. Putting all accountability on the woman by calling it a choice distracts from the root cause of the issue, individualizing it to women rather than the larger, societal issues at play. In addition, I see this as employing a neo-liberal sensibility; giving one the illusion of choice, liberation and reformation, which in reality protects an exploitative establishment.14 This illuded reformation maintains the same power structure and institutions, arguably making it worse than an apparent oppressive society.

With such a comprehensive discussion on the woman in love, it is difficult to ignore the man in love. From the very beginning of the text, it is made clear that men and women love differently. Specifically drawing from the quote Beauvoir pulled from The Gay Science, Nietzsche states that “if there should be men who also felt that desire for complete abandonment…they would not be men.”15 Beauvoir also repeatedly mentions the dominance of men throughout the text. Feminism can be tricky and controversial, however, in a simplified sense, it is primarily about every person having equal rights. The most common misconception is that feminism equates to hating men.16 While men do generally benefit from the patriarchy, many overlook how it can harm them too. Men often feel the pressure of taking on the dominant roles which they are limited to, dragging them into a pit of toxic masculinity that perpetuates the patriarchy.17 This is a phenomenon which I have experienced first-hand amongst men in South Asian communities. Constantly having to present a composed, stoic façade, I have seen men struggle with expressing all kinds of emotions in fear of sacrificing their masculinity. While Beauvoir focuses on the woman in love, I see the man in love also exhibiting the destructive nature of a patriarchal society.

Beauvoir’s writing is one of the foremost “phenomenological investigations” into the gendered body and experience,18 acknowledging the systemic barriers that women face, which surface through different social avenues, including love. This exciting, controversial nature of the writing has made it a foundational source in forming my opinions of our patriarchal society as a young South Asian woman and feminist. 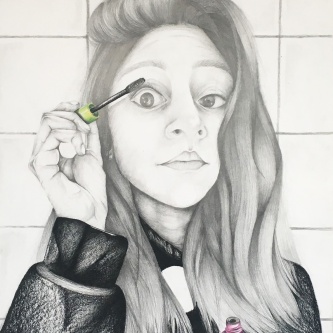 Suhani Karani is an Indian born, Kenyan – Canadian artist and designer. She is currently enrolled in OCAD University for a Bachelor’s in Fine Art, majoring in Drawing & Painting. As a first generation immigrant and a woman of colour, Suhani draws from her diverse cultural background and unique life experiences in her practice, mainly tackling issues of identity, femininity, diaspora and colonialism. Her work is currently being exhibited in an online show hosted by Propeller Art Gallery called Drawing & Painting Class of 2020 GradEx105 Show.