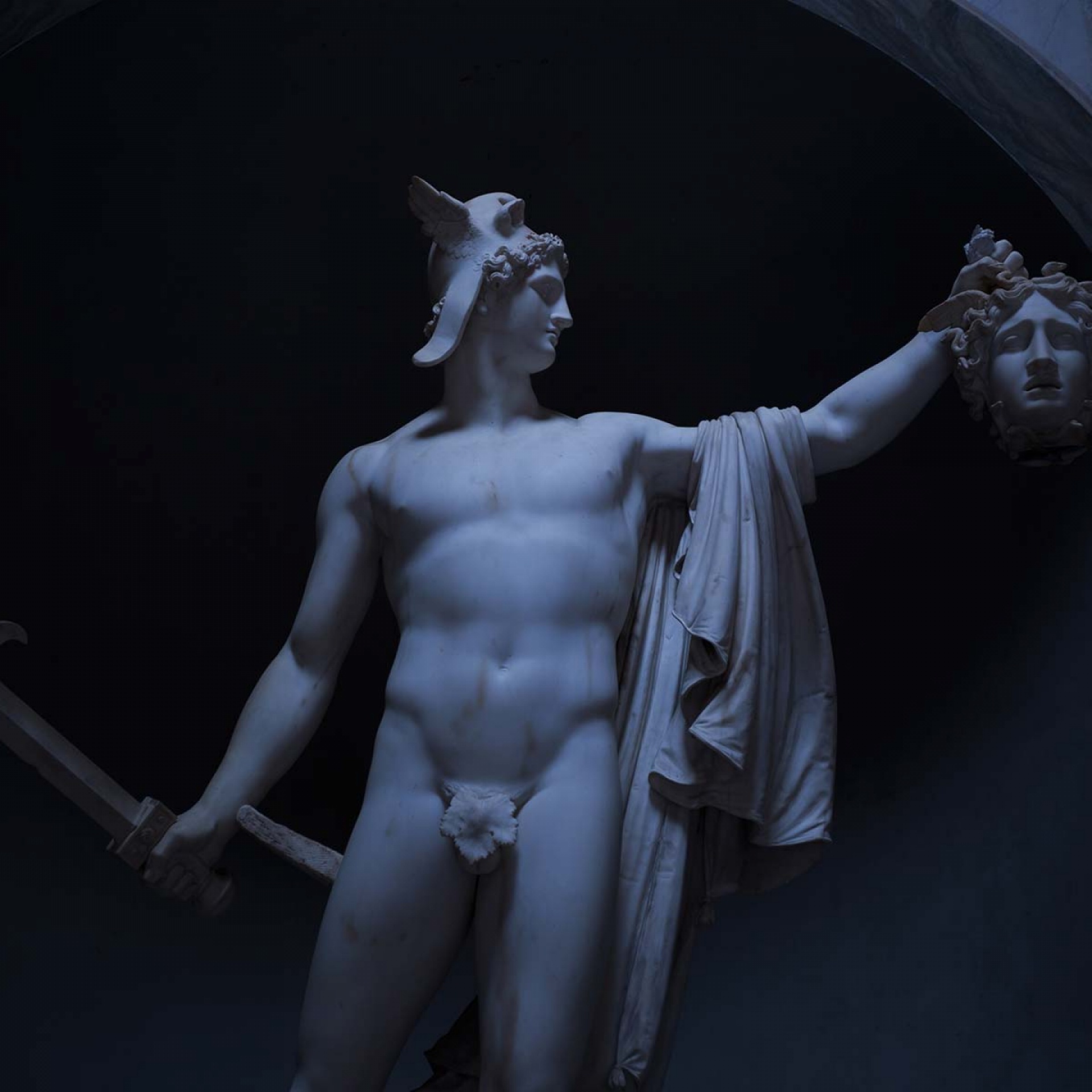 The following is a collection of notes, (part research, part stream-of-consciousness thought) on Medusa. They trace my exploration of the figure as she appears in art history, mythology and academic scholarship before reconsidering her in a contemporary context.

Here is Medusa in marble, her severed head held up in the idealized arm of Perseus in Antonio Canova’s sculpture of the Greek hero. In his other hand Perseus holds a sword, having just slain the woman whose gaze turns men to stone. Nearly three centuries earlier, Benvenuto Cellini depicted the same moment in bronze. In Cellini’s work, Perseus stands in winged sandals on the broken body of Medusa, her bleeding head held high in one hand and his sword held in the other. Canova’s Perseus looks at Medusa’s disembodied head while Cellini shows Perseus looking down at Medusa’s decapitated body. Both works are a moment of triumph over the monstrous threat signified by the snake-haired woman. Centuries later in 2008, Luciano Garbati looked at Cellini’s sculpture and reimagined the ancient myth, reversing the roles of Perseus and Medusa. In Garbati’s sculpture, a nude Medusa stands with shoulders squared, holding a sword in one hand and the head of Perseus in the other. Snakes slither around her head and down her shoulder, stylized to look like hair gathered to the side. Her stance is at once relaxed and tense as she shifts her weight onto one leg but keeps her upper body activated. She faces the viewer head on, looking out from beneath slightly furrowed brows with her confrontational gaze. Who is this Gorgon woman standing tall with serpent hair?

In Hesiod’s Theogony, Medusa is a beautiful maiden, the only mortal of three Gorgon sisters (Glennon). According to Apollodorus, Perseus is tricked by Polydectes (who has fallen in love with the former’s mother, Danae) into going on a quest to find Medusa and bring back her head (Wilk, 20). With the help of the gods, Perseus finds the sisters, knowing that anyone who looks at them is turned into stone (Wilk 20-21). Upon finding two of the three Gorgons asleep, Perseus uses his shield as a mirror, looking only at Medusa’s reflection so as to resist being turned to stone (Wilk 21-22). Even after Perseus has decapitated Medusa, her head continues to hold this power. Upon his return, Perseus discovers that Polydectes wanted him out of the way so that he could marry Danae. Perseus then uses the head of Medusa to turn Polydectes and his men into stone. (Wilk 21-22). In Apollodorus’s version of the myth, Medusa does not have snakes for hair (Wilk, 21). This detail is added later in Ovid’s "Metamorphoses" (Wilk 21).

In Ovid’s "Metamorphoses" the beautiful Medusa is raped by Poseidon in a temple of Athena (Wilk 24-25). According to Ovid, Poseidon is not punished, and Medusa is blamed. Athena, in her fury, curses Medusa, turning her into a hideous monster with writhing snakes for hair and a gaze that turns anyone she looks at to stone (Wilk 24-25).

As I sit here reading about Medusa, I am suddenly reminded of Nawal El Saadawi’s Woman at Point Zero, the story of a woman named Firdaus, awaiting her execution in Egypt’s Qanatir Prison. Firdaus, having been married off to a violent, older man, held captive as a sex slave by a different man and brought to work as a prostitute, is no stranger to male violence. There is a period of time during which she finds freedom as an independent sex worker but even that is eventually brought to an end by yet another violent man. This is the pimp whose murder lands her in prison facing a death sentence. “Every single man I [got] to know,” she says to El Saadawi, “filled me with but one desire: to lift my hand and bring it smashing down on his face” (El Saadawi 13-14).

It is no surprise, then, that Medusa has come to be recognized as a symbol of female rage. Emily Erwin Culpepper considers her own connection to the figure of Medusa through martial arts in “Ancient Gorgons: A Face for Contemporary Women’s Rage.” She describes being able to protect herself from a rape attempt by invoking her inner Gorgon (Currie 178). In “Transforming Medusa,” Charlotte Currie describes Culpepper’s account of later returning to the rage she had felt during the incident. Currie quotes Culpepper; “As I felt my face twist again into the fighting frenzy, I turned to the mirror and looked. What I saw in the mirror is a Gorgon if ever there was one” (Currie, 178). Currie interprets this statement to mean “that Medusa is something into which all women can transform simply by connecting with their own female rage” (Currie 178). Both Culpepper and Currie point to this embodiment of Medusa as an act of drawing power from one’s own rage —an act that, in this world, seems both inevitable and necessary.

I find my copy of El Saadawi’s book on the shelf and flip through its pages. An underlined sentence catches my eye. It is the end of a conversation between Firdaus and Sharifa, the woman who has taught Firdaus to become a prostitute:

“My skin is soft, but my heart is cruel, and my bite deadly.”

“Yes, exactly like a snake. Life is a snake. They are the same, Firdaus. If the snake realizes you are not a snake, it will bite you. And if life knows you have no sting, it will devour you.” (El Saadawi 72).

Was Athena punishing Medusa, as the myth says, or was she offering her a means for protection?

The name Medusa derives from the “ancient Greek verb ‘μέδω’” which means "to guard or protect” (Garcia). This seems particularly fitting considering Medusa’s ability to ward off danger with her gaze. This protective function is also reflected in the several depictions of her face on various shields. In Homer’s the Illiad, the head of Medusa is found on the aegis of Zeus. In Hesiod’s description of the shield of Heracles, there is a visual representation of the myth of Perseus and Medusa (Glennon). Perhaps the most well-known example is the face of Medusa on the aegis of Athena (Glennon). Madeleine Glennon notes that representations of Medusa have also adorned the “martial accoutrements of Greek soldiers, [including] helmets, shields, and greaves” (Glennon). In this way, even as Medusa is described and depicted as a monstrous force, there also seems to be an underlying recognition of her ability to protect from harm and a desire to own and weaponize the power of her gaze.

This recognition of Medusa’s power and the subsequent need to control that power is taken up by Susan R. Bowers in “Medusa and the Female Gaze.” Bowers interprets Medusa’s ability to turn people into stone as a representation of the sense of subjectivity that is exercised by the female gaze. She cites Hazel Barnes’s assertion that “it was not the horror of the object looked at which destroyed the victim but the fact that his eyes met those of Medusa looking at him” (Bowers 219). In this way, the power of Medusa lies in her ability to look and take others as the object of her gaze. In turning men into the object of her gaze, Medusa is able to reduce their subjectivity to objectivity and reveal their “physical and [psychic] vulnerability [and] fragility” (Hazel Barnes qtd. in Bowers 220). According to Bowers, “patriarchal males have had to make Medusa – and by extension, all women – the object of the male gaze as a protection against being objectified themselves by Medusa’s female gaze” (Bowers 220). In order to do so, they have had to destroy female subjectivity (Bowers 220).

Sara Ahmed uses the term “feminist killjoy” to describe those who have come to recognize the racist and sexist power structures that are at play in the world and who cannot stop seeing them. The feminist killjoy is someone who calls out that which does not seem right, even though it irritates, exhausts or threatens people to be confronted with that recognition (Ahmed 37). The feminist killjoy sees these wrongs and by calling them out, materializes the otherwise invisible structures of oppression, fixing them in place in order to be analyzed, and unravelled (Ahmed 36-37). Turning them to stone so they can be shattered into pieces, so they can be crushed into dust.

Luciano Garbati’s sculpture of Medusa currently stands in Manhattan, across the street from the criminal courthouse on Centre Street where several men accused of sexual assault were prosecuted during the height of the #MeToo movement (Jacobs).  In relation to the sculptures of Perseus and Medusa by Cellini and Canova, Garbati’s work is a reversal of power. Instead of Perseus having slain Medusa, the full figure of Medusa stands tall holding the head of Perseus. Many have considered this sculpture a symbol of justice and female empowerment (Jacobs). Others have viewed it as yet another female nude sculpted by a man (Jacobs).

I look through different images of Garbati’s sculpture and search for the mythic power of Medusa. There is the toned body of a woman standing in the nude with her snake-hair swept neatly to one side. There is the directness of her gaze. There is a sword and the decapitated head of Perseus and yet I cannot help but feel that the true power of Medusa cannot be found in this sculpture. Medusa’s power did not come from her skillful handling of weapons. She was a force unto herself. The head of Medusa held its power long after she was decapitated by Perseus. The idea of Medusa relying on the same weapon as Perseus diminishes the power that landed her image on the shields of Greek gods and made her an icon of mythology and pop culture.

Perhaps this sculpture is timely not as a symbol of female power but for its inadvertent demonstration of the impossibility for Medusa to exist, full force, in this world. Hers is a power that is feared and controlled. And yet I have seen her in every woman I have ever known. She is El Saadawi’s Woman at Point Zero and Ahmed’s feminist killjoy. She is protesting in the streets. She is walking past this sculpture, thinking, Here is Medusa in bronze, wielding the very weapon that led to her own demise. Across the street there is a woman in a courthouse, addressing a judge and jury, turning defendants to stone on the stand. 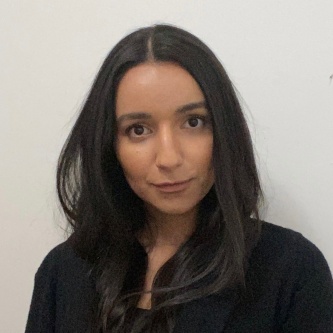 Avneet Dhaliwal is a student in her final year of the Visual and Critical Studies programme. Her research interests include contemporary art, archives - their memories and their ghosts - and the intersections of art, language and community.