Not being able to stack fish bait is ruining my life

The Burden of Optimal Play and Embracing the Unfun Ideology of Animal Crossing: New Horizons 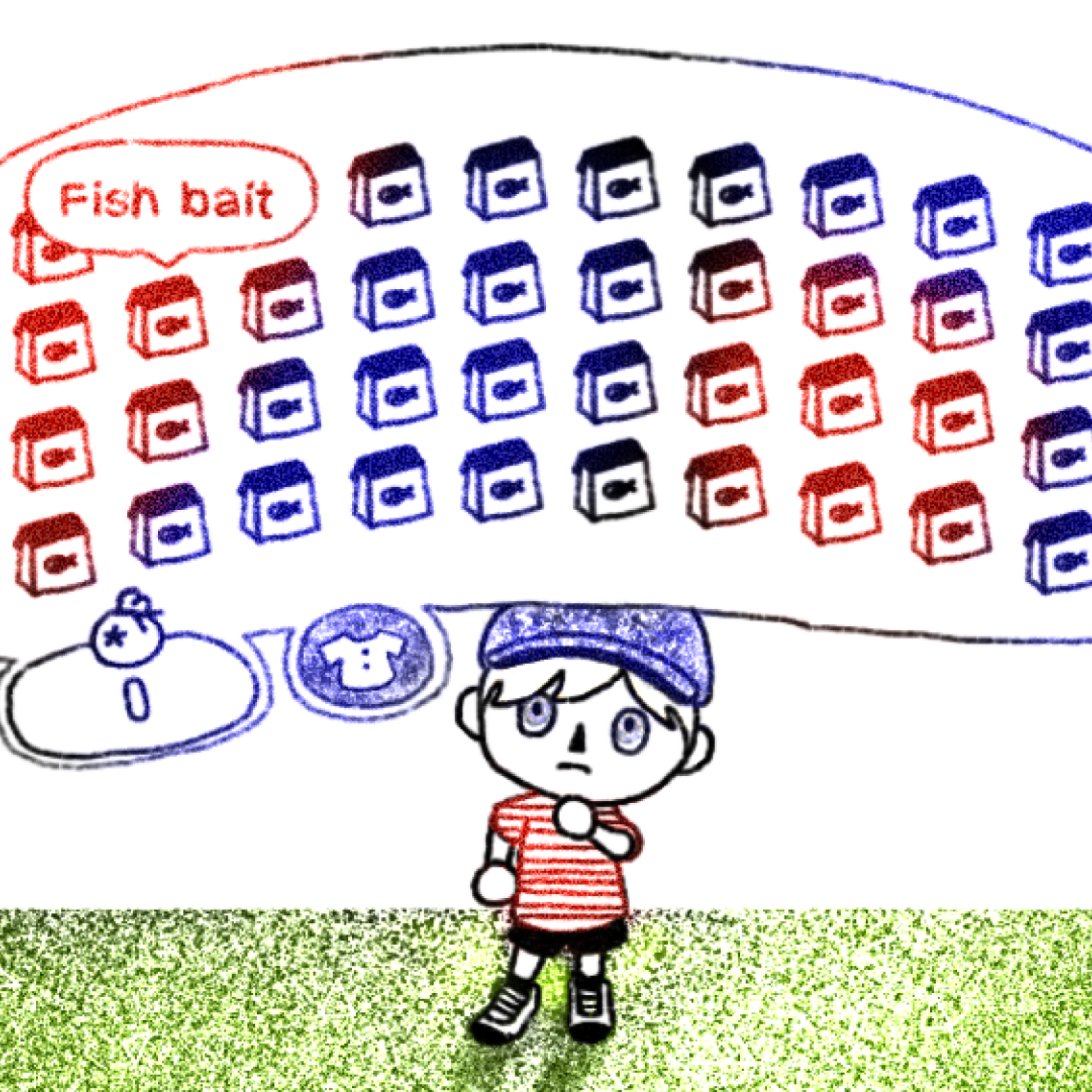 Discussions around quality-of-life (QoL) features in video games are sprawling as gamers undoubtedly have much to say about how their lives could be better. From sliders to menu systems to load screens, typically, quality-of-life improvements apply to the aspects of a game that exist outside of the core gameplay mechanics. Specifically, a game’s QoL rating is attached to the frictionless efficiency of the player experience. In his article on playability in game design, Josh Bycer writes: “It’s a bit like being forced to do a bunch of paperwork just prior to an enjoyable event.” What happens, then, if the game is a chore simulator with intentionally slow gameplay?

Animal Crossing: New Horizons (Nintendo, 2020; AC:NH) is a social simulation video game released in March 2020 as the long-awaited fifth entry to the Animal Crossing series. In every Animal Crossing game, the player character purchases a house in a quaint new place and engages in a loop of daily chores: paying off loans, harvesting materials, decorating one’s home, and making friends with animal NPC neighbours. Contrary to previous Animal Crossing games, New Horizons affords the player an unprecedented level of control over the game’s environment. Although AC:NH does provide the player with a randomly generated map, as the game progresses, the player can not only move buildings, but they can also deconstruct and rebuild the actual topography of the island. Core to the gameplay loop of AC:NH—like many other real-time life simulation games—is the repetition of chores (e.g., chopping wood) for material gain. As Jin Kim writes in his ethnographic analysis of Animal Crossing, “Life simulation games are realistic because they deliver narratives of ordinary life filled with repetitive routines and menial tasks” (357). The essential Animal Crossing experience is that of a chore simulator.

On May 5, 2020, YouTuber Nick Ha published a parody video in the style of Nintendo’s regular patch/release update videos, detailing a list of quality-of-life changes that fans would like to see implemented within New Horizons. The changes featured within the video include bulk crafting, the removal of inventory menus, instant inventory sorting, the ability to eat multiple fruits at once, the ability to buy items in bulk, and other gameplay changes associated with convenience and efficiency. As of April 2022, Ha’s video has over 1.6 million views, with comments from users asking why Nintendo has not yet implemented any of these features and why the developers did not think to include them from launch. Why, indeed, would a developer choose the tedious journey over the shortcut? AC:NH denies the popular understanding of QoL improvements as necessities, revealing how many players expect video games to provide them with a certain degree of efficiency and optimization of play. The juxtaposition of AC:NH’s two primary modes of play—world creation/power fantasy and world maintenance/slow living—exposes the inherent incompatibilities between the player’s ideological baggage and the game’s elements of forced slowness. By examining AC:NH’s failure to perform according to common QoL and gameplay expectations, we can begin to analyze how and why video games embrace friction versus ease of use.

In his article on how time is gamified in Animal Crossing: Pocket Camp (Nintendo, 2017), Rainforest Scully-Blaker examines the connections between the slow living philosophy and the Animal Crossing series, making the argument that, across its many iterations, Animal Crossing consistently encourages its players to slow down. As Scully-Blaker notes, it is “one of the few games that punishes the player for running rather than walking without stealth being a core gameplay mechanic” (96). Though Scully-Blaker is commenting on how players must walk through flowerbeds, lest they destroy their flowers’ blooms, this sentiment may be read more generally regarding the enforcement of slow play in AC:NH. There is a limit to the number of fossils, fruit, and other resources the player can discover and harvest each day, and many other resources are only available during specific seasons. These elements of slowness are core to the series' ongoing focus on having the player create and maintain their own little world (Scully-Blaker, 97). Recalling Ha’s recommended list of quality-of-life improvements, it would certainly take less time to catch every autumnal fish if one could craft 30 bags of fish bait at once (which is, notably, an item new to the Animal Crossing series & created to speed up the fish-catching process), but maybe a more efficient (and fish-abundant) virtual life is not necessarily one of higher quality. Radical slowness, as Scully-Blaker writes, is a philosophical act of resistance against the forced high speeds of capitalist growth. By embracing the inefficient crafting systems of AC:NH, as a player I am engaging in a “deliberate failure to ‘keep up’ with the ever-accelerating rhythm of capitalist society as a political act” (Scully-Blaker, 103). However, the game cannot necessarily be credited as revolutionary, for in comparison to previous titles in the series, the game offers the player unprecedented power and control over the game’s environment and characters. Additionally, a slow pace is not inherently radical. Scully-Blaker notes that slowness can be experienced as an inconvenience or a privilege (93). Animal Crossing: New Horizons incorporates slow elements within a capitalistically infused gameplay loop structured around selling collected goods and paying off debt, potentially creating a dissonance that, to the player, is experienced as a design flaw.

Not all gamers desire their time to be spent efficiently, which becomes evident through an exploration of popular video game mods. Mods, short for “modifications,” are player-made alterations created with the intention of modifying aspects of a game. The Elder Scrolls: Skyrim (Bethesda, 2011), a popular open-world fantasy game, is one of many games that has numerous QoL mods created by the player community. These modifications include changes to the game’s user interface, item pick-up options, and general inventory management. Oddly, the top pick on Game Rant’s 2021 list of best Skyrim QoL mods is Simply Knock (2017) by Chesko. This mod allows players to knock on locked doors instead of forcing them to pick the lock or leave—which perhaps speaks to the lack of common understanding regarding what QoL means (Burgar). Despite the prevalence and popularity of QoL mods, there is an opposing subsect: the anti-QoL mods. Though they do not refer to themselves as such, mods like Fast Travel Disabler (2013) by DrNegative seek to make certain aspects of gameplay inefficient. In his analysis of Animal Crossing and rhetoric in video games, Ian Bogost states that video games must first be understood as “media where cultural values themselves can be represented … as deliberate expressions of particular perspectives” (119). Like Fast Travel Disabler, Nintendo’s decision to force AC:NH players to craft one item at a time reveals how certain aspects of a game’s design become enthralling when you consider them as deliberate ideological choices. The description of Fast Travel Disabler reads, “This mod disables the fast travel option within the game. It is targeted at those who find comfort in the fact that they never had a choice” (Nexus Mods). DrNegative describes the necessity for the mod as helpful in removing the “temptation” to fast travel: player choice is not enough. Perhaps, allowing the player to choose whether to engage in slowness—for example, if Animal Crossing: New Horizons were to allow the player to craft infinite items at one time—denies the game space to create and present its own ideology. The purposeful and occasionally tedious slowness in AC:NH is not operating against its ideology; rather, it is a core aspect of it, providing the balance that allows for the game’s central power fantasy to be experienced as—and perhaps obscured by—playful mundanity.

AC:NH is a chore simulator, and sometimes, its gameplay feels like a chore. Do you want to paint your dresser pink? First, you must collect enough materials either from the environment or from your home’s storage (which is naturally only accessible while you’re actually inside your home) to craft a customization kit at your DIY bench. You can use that same bench to customize that dresser—oops, you need two customization kits! Time to run home, gather the materials, and construct another kit before running back to the DIY bench. After selecting the “pink” option, you will sit through a cut scene that cannot be skipped or sped up as the customization process completes. Now, you can place the dresser in your house… except, if you look at it, maybe natural wood would look better. Time to do it all again—and what a joy it is, to relish in the slow mundanity of it all. Like walking down a dirt path in Skyrim, listening to distant wolves howling as the sun sets, and knowing you’ll be pressing forward on the joystick for a good long while, perhaps it’s worth considering, accepting, and uplifting the ways that games inconvenience us—and recognizing inefficiency as an ideological tool. 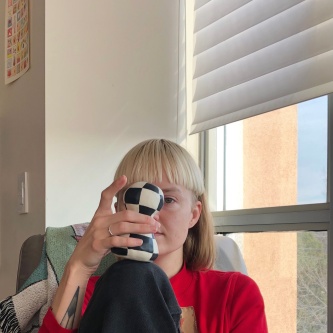 Nik Clydesdale-October is a multidisciplinary artist based in Toronto. They have a BAH in English Literature from Queen’s University and they are a current student at OCADU, studying Illustration and Material Art and Design. Their work is centred around collected, invented worlds.